A masterful musician and songwriter, John is recognised as one of the most creative guitarists on the circuit. After a great year on the road, in the studio and in each other’s pockets the band – John on guitar and vocals, Toby Murray on drums and Justin Kool on bass – have refined their sound, with John citing a melting pot of influences from Jack White and The Black Keys to Queens of the Stone Age, Black Sabbath, Hendrix, Zappa, Iggy Pop, Captain Beefheart and Led Zeppelin. 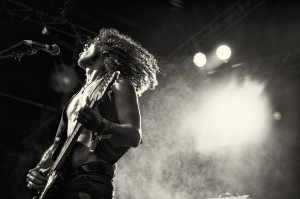