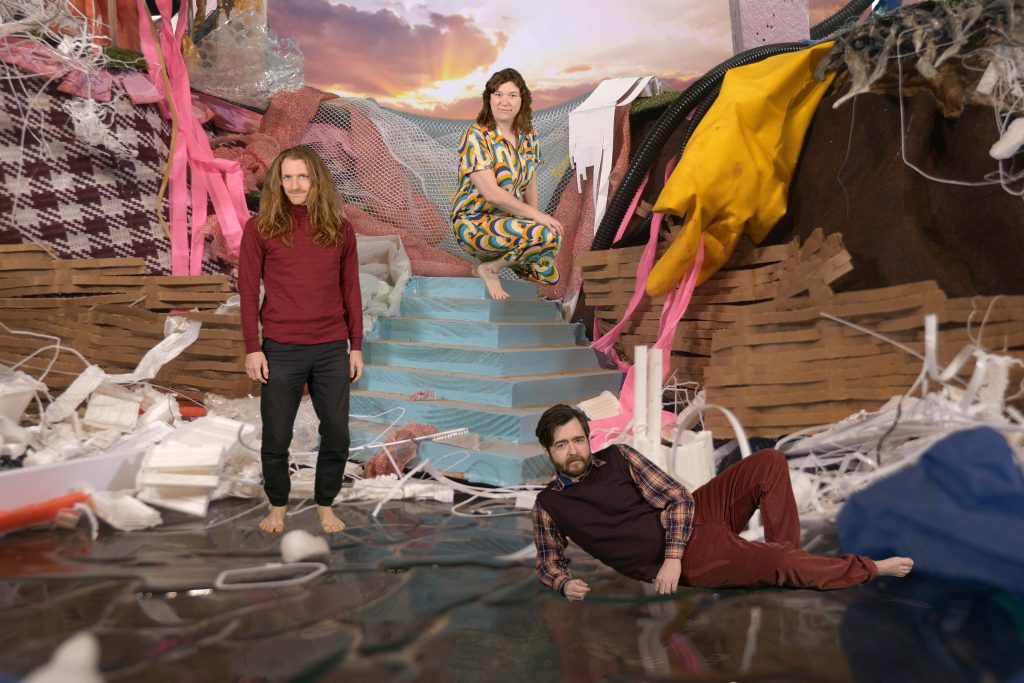 The Burning Hell is the ongoing musical project of songwriter Mathias Kom and multi-instrumentalists Ariel Sharratt and Jake Nicoll, often including additional comrades and collaborators. Their densely populated genre-shifting songs are packed with an abundance of literary, historical, cultural, and pop-cultural forebears, heroes and villains, subjects and objects, stories and hooks. They move with heavy rhyme and a light step, incorporating a frequent fixation on apocalypse and ruin into work that celebrates participation in a surprising, delightful, and even occasionally beautiful world. Which is to say they’re good dance partners and they want to dance with you.

The Burning Hell are DIY in the best possible sense—underlining the “Do”—their albums and singles manifesting from the edges of the music industry as collaborations with independent labels and publishers, and their years of touring forming connections person by person, show by show, in town after town. They’ve famously ventured to every out-of-the-way island and inland neglected by the less adventurous, emphasising presence and connection across latitudes, longitudes, and time, affirming a commitment to the political power of sharing music. It is a profoundly optimistic gesture, by way of killer tunes, exuberant hooks, and joyful live performances.

Garbage Island, The Burning Hell’s newest album, is a danceable romp through a fractured landscape of apocalypses near and far, celebrations of failure and escape, a dense medley of pop culture references, and plenty of birdlife. It was released on June 24 2022 on You’ve Changed Records in North America and BB*Island everywhere else, and the band will spend much of 2022 and 2023 touring it through Europe, North America and Australia.

****  ‘…funny, sardonic, and literate. Add in a New-Wavey, Loaded-era VU sensibility, and it’s impossible not to be swayed by these acerbically funny story songs.’  MOJO MAGAZINE

‘…super literate and fantastically droll, over backings that range from bubbling synth pop and acoustic folk to rattly punk and even a spot of semi-calypso. Silver Jews and Jeffrey Lewis spring to mind on the terrific Birdwatching; Bird Queen of Garbage Island sounds like a glorious revival of Tom Tom Club.’ UNCUT MAGAZINE

9/10 ‘Maybe The Burning Hell won’t be for everyone – I don’t think they’d even want to be for everyone – but if you like brilliant, thought-provoking lyrics, superb musicianship and killer tunes, you know what… you might just love this too.’ AMERICANA UK

Steven Lambke is a writer of songs and poems. He has previously performed as Baby Eagle, but has insisted that one should swap masks every so often and look through new eyes. In 2009, Steven Lambke and Daniel Romano co-founded You’ve Changed Records, and from 2017-2021 he was the Creative Director of Sappyfest in Sackville, NB. Steven Lambke is also a member of the Constantines, and lives in Toronto, ON or Sackville, NB depending on the season. His newest album is Volcano Volcano.

Jake Nicoll is an award-winning producer and a cornerstone of the music scene in his home of St. John’s, Newfoundland, best known for his talents as a multi-instrumentalist and recording engineer. Yet all the while, he’s also been writing and recording his own music, which is often intimate and sometimes experimental. His latest record Pool House is a masterful work of minimalism, confession, and connection.